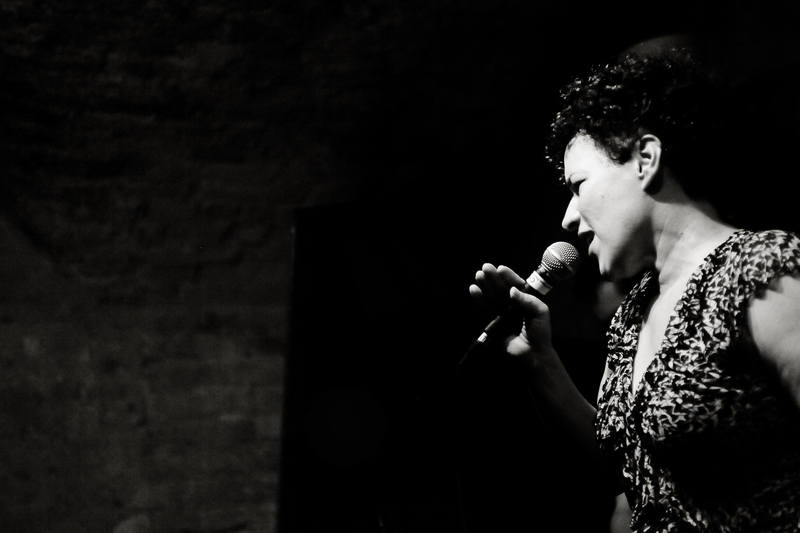 from  the screenplay of The Talented Mr Ripley

About Edana - a singer of "raw power and emotional intensity"

Born into the most wonderful Anglo-Italian family where music, food and wine -- and ice-cream! - were the basic stuff of life, Edana has been singing forever. In the last five years she has established herself as a successful jazz performer, regularly playing to full houses in England and Italy. Festival performances include the Isle of Wight Jazz Festival and Jazz on the Meadow, in support of Courtney Pine.

Still On My Feet is dedicated to all Edana's much loved family, and to her brother Anthony especially. Anthony was the multi-talented, Oscar-winning film director who died at the age of 54 in 2008. Two of the tunes on the album were featured on the soundtrack of two of Anthony's films: A Case of You, was in Truly Madly Deeply, and You Don't Know What Love Is featured in The Talented Mr Ripley.

Edana made her second album, All or Nothing, as a tribute to one of the most influential jazz vocalists of all time, the great Billie Holiday. The album is a collection of some of the songs the made famous and some less well known tunes, many of which Billie co-wrote.

Both albums were produced by Liane Carroll and engineered by James McMillan, at Quiet Money Studios, Hastings.

Nothing beats live jazz and we'd love to see you at one of our gigs! Here are some recent comments from press & audience members:

"Jazz singer Edana Minghella managed to pull off the tricky feat of both wrenching at your heart strings and bringing a sense of zest and fun to her packed show..."

"Yours is a voice I could listen to for a very long time."

"I would kill for your voice!! And what unique phrasing. Lovely, lovely evening which sent us all away smiling."

"Wow! Edana - we had such a wonderful time. You are an extraordinary artist. You phrase like a dream, you have a beautiful, distinctive voice and your interpretation of familiar songs (eg the Joni Mitchell) is quite stunning. We loved your choice of music, the way you looked and your easy, charming and witty connection with the audience. And you have a brilliant band."

Lee Goodall (saxophones and a lot more besides!)

Want a fabulous band for your big birthday, wedding, civil partnership or other special event? We are available for private functions to create a wonderful sophisticated atmosphere for dancing, smooching, romance. Contact me to talk through your requirements by clicking here.

You can also Tweet this site to your followers

(photo on this page by Daniela Crevena (C) and on previous page by Dominic Minghella (C) All rights reserved).